It’s Communism Week at CRP. All this week, we’re learning Chinese through the lens of historical and modern CCP propaganda, speeches, stories, essays and songs.

It’s Communism Week at CRP. All this week, we’re learning Chinese through the lens of historical and modern CCP propaganda, speeches, stories, essays and songs.

Quick reminder: To maintain a polite, language learning-focused environment, political comments – positive, negative, or neutral – are not allowed, and will be deleted. Dinner table rules, please.

Zhu De (朱德 zhū dé) is an early Communist folk hero, and the founder of the People’s Liberation Army (解放军 jiě fàng jūn), also called the Red Army (红军 hóng jūn). He was applauded as a people’s general, and this popular revolutionary story – in which Zhu De helps his regiment carry grain (粮食 liáng shi) up a mountain on a carrying pole (扁担 biǎn dan) – shows his willingness to toil alongside the common soldiers. The story spawned many popular posters of him, like this one: 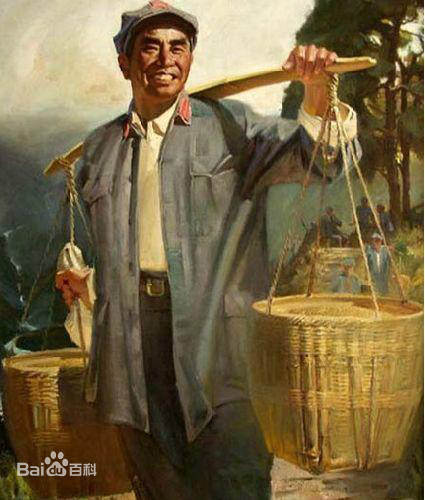 Zhu De is a revolutionary from the early days of Chinese Communism. For those who don’t know their CCP history: modern China was founded in 1949, but for the 20-odd years before that, the Red Army was fighting various wars for control of the country. Zhu De was instrumental in these wars, and after 1949, he became a key Party leader and politician. This story is set in the early days of the wars, in 1928. It’s crazy to think that Zhu De, who was born in 1886 and died in 1976, lived to be 90 years old, but spent three or four decades of his life doing nothing but fighting battles. Considering how many people died in those wars, or were purged in political upheavals afterwards, this guy was a real survivor.

This is an example of a story that will look much harder on first glance than it actually is. That’s because some of the vocab is intermediate, but the sentence structure is beginner. The intermediate vocab is also used repetitively, so once you look up the tougher words, you’ll immediately have an opportunity to see them again in the text. The first two sentences are much rougher than the rest, because they’re almost entirely made up of intermediate words, so push through those and it’ll be easier going from there. If you break the sentences down patiently, and you are at HSK 3 or up, I promise you can get through this.

Another word that comes up quite a bit is 粮食 liáng shi – Also just 粮 liáng. This is a general term for “grain”, could be wheat, rice, millet, oats, or whatever.

And one phrase that might be a little hard to understand:

争着去 zhēng zhe qù – 争 means “to fight” or “to struggle”, 着 is a present-tense grammar word, and 去 means “go” or “leave”. At first glance, 争着去 looks like it means “fighting in order to leave someplace”, but it’s not. In this case, it’s describing a group of people pushing and shoving to be the first to volunteer to go somewhere. Imagine a group of soldiers asked to undertake a hard mission – one person says, “I’ll go!” and someone else says, “No, choose me, I’ll go!”. This is 争着去.

Du Chinese has a big catalog of easy HSK 1 and HSK 2 texts for ultra-beginners. There are quite a few free practice lessons, but CRP readers get 10% off on paid accounts using the discount code CRP10.

Show English translation »
In 1928, Comrade Zhu De lead a detachment of Red Army troops to Jinggang Mountain. The Red Army was on the mountain, but down the mountain not far away was the enemy.

There wasn’t much grain on Jinggang Mountain, so [they] often had to send a few people down to the fields below to tote back some grain. Jinggang Mountain was far from the fields, the mountain was high and the roads were narrow, it was very hard going. But each time grain had to be carried back, everyone fought to be the one to go.

Kendra Schaefer is a tech researcher based in Beijing since 2002. This is her pet project.
Twitter: @ChineseReading