Happy Year of the Sheep! Couple of days ago, I stumbled across the Book “The Last Yin Yang Master”, aka “The Last Onmyoji” （最后一个阴阳师), a supernatural ghost story available for free online. It’s incredibly rare to find full-length books that aren’t impossibly difficult to get through, but this one is phenomenal for learners. I’m gonna put part of the first chapter here, so you can dive on in. The rest can be grabbed on Zhuaji.com. 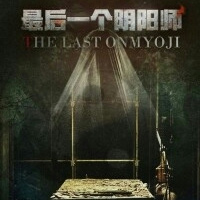 I’ve recently sort of discovered that ghost stories and detective novels are where it’s at for practicing reading. The cliches in a Chinese murder mystery are exactly the same as they are anywhere: hard-boiled cop, confused rookie, seductive woman, shady business, and definitely a chase scene. It’s easier to follow a story when you have a semi-expectation of what’s supposed to happen. They get hard when people start talking about blood spatter and ballistics, but you can kind of get the gist. Ghost stories are the same way – a scene of normalcy is set, followed by some red-flag strangeness that everyone completely ignores because they don’t believe in the supernatural, followed by some myths and legends, or maybe a mysterious old man, or maybe a body goes missing, and then things really freaky. Again, the read gets hard when characters start talking about the mystic books of old, or funeral customs, so you should probably be reading this with the help of Pleco (which I do), but The Last Onmyoji is accessible enough that those parts shouldn’t totally derail you. Highly recommended.

This really is worth a go for readers at almost all levels. The read is late-intermediate, but using Pleco, late-stage beginners and early-intermediates will be able to understand large chunks of it, enough to motivate you to puzzle through the parts you don’t get, more so because this is being told in first-person. Remember, now, that the beginning of a book is usually the hardest as you try to get a sense of the story. Once the story gets rolling, it’s easier to flow with it. Advanced readers may just appreciate learning a bit of spooky vocab.

The segment that I”m translating here doesn’t have any ghostly bits in it, this is the first chapter to get you going on the story. It’s packed full of Chinese village culture, and some parts at the end that would be considered extremely un-PC in the west: a little anti-Japanese talk, and a little bit about buying women, the rarities of college education in the countryside: the realities of village life in China, even these days.

There’s a lot I could talk about in here, but I do like the word 投 tóu – This word had a ton of meanings. Imagine slipping a piece of paper into a suggestion box. Got it? That’s what this word embodies, that action, or anything related to a similar action of taking a flat object and dropping it into a slot, literally or figuratively. So it can mean to “vote”, as in an election, because you’re submitting a ballot. It can mean to “slide” an envelope into a letter box. In this case, it means to “submit” a resume while seeking a job offer. We don’t have a word for that concept in English, I think.

SHOW ENGLISH TRANSLATION »
My name is Lin Xiaofan, I’m 23 years old this year. I just graduated from college. A third-rate school with fourth-tier grades, my college was in Hangzhou, and after I graduated I first went to work as sales staff at a real estate agency with a salary of 1,800 [translator's note: this is a very low salary, about $300 USD / month]. My sales performance was poor, and the company never fired me, but I was so embarrassed that I left.

I wandered around Hangzhou for two months, submitted I don’t even know how many resumes, or went to how many interviews, but nothing came through. After I’d spent all my travel money, I went back to my home town.

My home town is Luoyang. In the Luoyang countryside falls a little village called Shilipu’er.

The reason I went home is because the village’s only teacher got tuberculosis, and he was very seriously ill, so as the village’s only person who’d ever gone off to college, the village chief dug up a thousand-dollar [translator's note: "1000 kuai" is "1000 Chinese Renminbi"] investment and asked me to substitute teach.

So I went home.

My life away from home wasn’t even as good as a dog’s, but I get plenty of respect in my home town.

In such a remote village, being a college graduate is still an extremely awesome thing to be, and every time the villagers see my father, they all give him a thumbs-up and say, “Your family’s ancestral grave is emitting green smoke, unexpectedly out popped a college student! You’ll be walking off this mountain after a while!” [translator's note: this is a compliment regarding the family's lineage.]

Of course at these times, my father would smile in a simple and honest way, wiping the sweat off his brow.

After I came back to the village, all the local matchmakers tried to set me up with someone, almost trampling down my door, no exaggeration. If you’ve never been in that [village] environment, you don’t know the power of those three words, “College Degree Holder”.

My dad also made a supreme effort to settle me, because in his eyes, at 23 years old I’d already passed marrying age. Everyone my age already had kids running around with their bare butts hanging out.

So as not to make him worry, I’d already coped with my first blind date.

Yes, it was definitely “coping”.

College, speaking frankly, was a place with completely different place with different rationales, but although I came from a farm village, I wasn’t considered ugly, you might even say I’m handsome. I had a girlfriend, but I had no money, and she wasn’t very rich either, but that’s just the way it was, we were together three years, and I used up all my part-time work money trying to do all the things a boyfriend is supposed to do. In the third year, we broke up.

On that day, on the hill behind our school, I drank a bottle of 2-dollar liquor. After I woke up, I wasn’t sad anymore, and I just continued muddle-headedly passing the days.

About my looks, those I inherited from my mother.

A good-looking woman from who-knows-where.

A few decades ago, my father went to the city, and spent three hundred dollars to buy her and bring her home.

My dad said, that day he spent two bucks to buy mom some clothes, and when he returned, mom’s good looks made everyone in the village drool all over the ground.

Pity, she was an idiot.

If she hadn’t been an idiot, my dad could never have afforded her.

Then I came along, and mom’s dementia continued as before, but her brand of dementia wasn’t like a crazy street person’s, she was very quiet.

This is the environment I grew up in, but I don’t want to make it sound literary, I had an antisocial nature, but even so, I still had a full childhood.

My father is very industrious, he has a farmer’s strength, using the farm tools in his hands, he nurtured a household. I don’t have anything to blame him for.

My grandfather is a retired soldier, he’s illiterate, and he doesn’t have any of a villager’s typical shrewdness, on the contrary he’s terrifyingly honest. Some people said he was GMD [translator's note: GMD = guo min dang, the fascist party in the Chinese civil war, who lost], some people said he was GCD [GCD = gong chang dang, the communist party that won the war and remains in power today], but he doesn’t even know himself which “dang” [translator's note - this "dang" means "political party"] he was in, the only thing he knows is that he grabbed a gun and fought the Japanese devils [the Japanese invaded while the GMD and the GCD were fighting each other], and after the devils ran away, he went home.